How To Smoke Shatter

Smoking shatter is a trending topic of conversation in the world of Cannabis.

Experts think that knowing how to smoke marijuana in various ways is a handy skill to have.

We’ve been receiving tons of questions about how to smoke shatter, so get ready to deep dive into that in this article.

By the time you finish reading this, you’ll be more confident taking a crack at smoking shatter.

Want to give shatter try? Check out our various shatter selections here.

Shatter got its name from its appearance and delicateness. This cannabis extract is easy to break into pieces because of its fragility, making it straightforward to use.

The reason it’s gaining attention from cannabis users is due to the high concentration of THC it possesses. It’s the crispest form of butane hash oil, after all.

Most people even wonder which is most potent: shatter Canada or wax. In most cases, they’re pretty much the same, so you can expect the same level of long-lasting high from both of them.

However, while some shatter contains about 50% of THC, others can have up to 90%.

Therefore, it’s crucial to do your due diligence before you get on the shatter train.

How to Smoke Shatter Properly 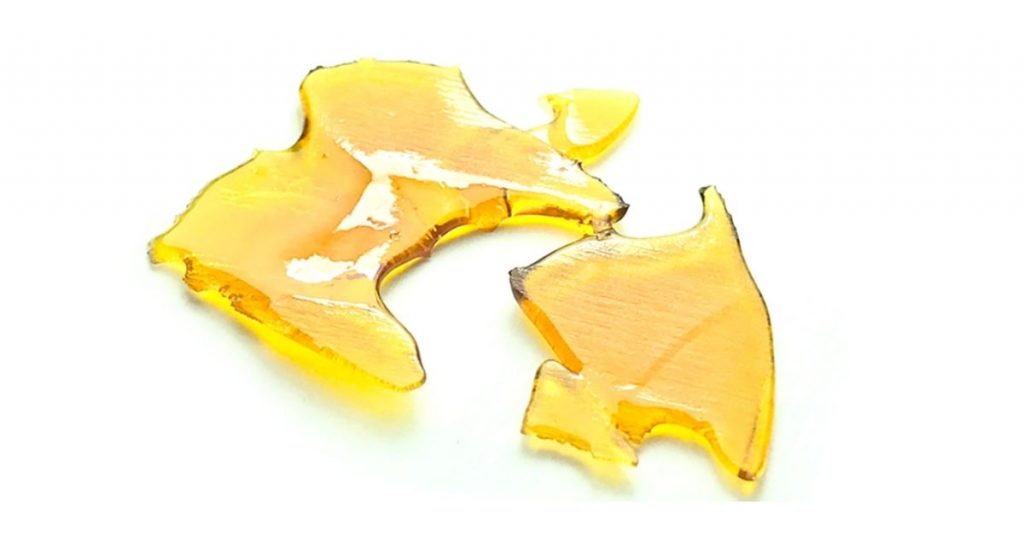 If you’re searching for the best way to smoke shatter, there’s no single answer. It’s all a matter of preference.

To help you figure out what works, we’ve listed out a couple of methods that you might want to kick around with.

Smoke Shatter With a Rig

Using an oil rig is the go-to method for consuming concentrates. Most people refer to the method as “dab rig”.

Creating high-quality vapour maximizes the shatter, and that’s what you get from this technique — a nice, crisp hit in a jiff.

A rig looks like a bong, but it’s made for a different purpose: to burn concentrates instead of dried products.

There are two main components of a rig: the nail and the dome. The nail zaps the concentrates while the dome secures the resulting vapour so that you can enjoy it to the fullest.

How to smoke shatter in a rig

Step 1: Place water in a rig, filling it up until bubbles appear.

Step 2: Put the nail and wait until it turns red.

Step 3: Using a metal dabber, get a sufficient amount of shatter and gently “dab” onto the nail.

Step 4: The oil blazes up instantaneously, releasing thick smoke, which you then breathe in through the rig.

Smoke Shatter in a Joint

Can you smoke shatter in a joint? Absolutely!

Classics rarely fail, and rolling it up is a fail-safe option. Plus, you don’t even have to spend an extra dime since you probably already have plenty of joint papers lying around.

Unfortunately, you might end up wasting some concentrates away, along with the quality smoke that goes with it. That’s not to stay, you won’t get that sought-after high in this method. You will, but you could get a better kick from the shatter through other techniques.

How to Smoke Shatter in a Joint

Method 1: Place the shatter inside the joint, leaving a tiny bit of gap on both ends to avoid the flame from interacting with the shatter. Pro Tip: You can add some oil as you roll.

Method 2: Put the shatter around the blunt, whichever way you like. You get some creative freedom here. Fair warning, though. Melting shatter can be a little challenging to handle. Things can get messy.

Smoke Shatter in a Bong

People are always looking for simple ways to smoke shatter, so they won’t have to splurge on a rig.

Here’s some good news: If you’ve got a bong on hand, you can use it to inhale shatter. But you’ll need to have ground buds for it to be a success. Then, you use it as normal to end up with a decent high.

But bear in mind that it won’t go off. If you want to take advantage of the concentrates better, you’ll have to keep huffin’ and puffin’ so you won’t lose a lot of smoke. Some people are also not fond of the herby-taste it comes with.

How to Smoke Shatter in a Bong 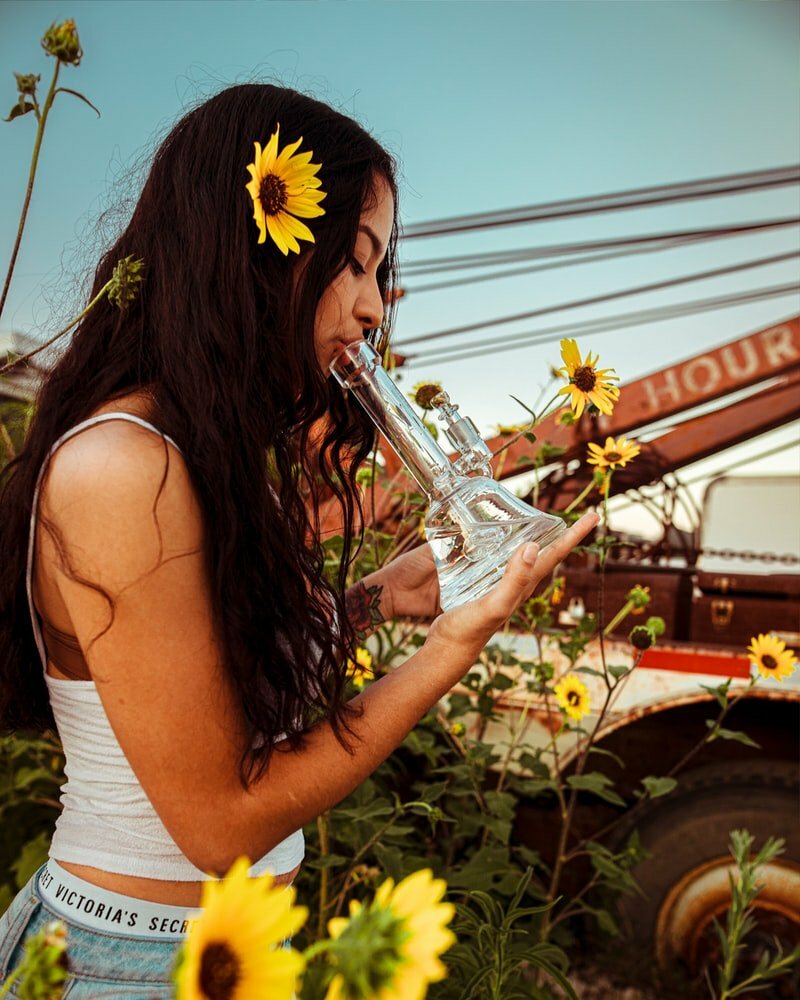 Step 2: Place some pieces of shatter on top

Step 3: Sandwich the shatter with ground bud up to the brim.

Step 4: Light it up, but don’t hold the lighter too close to avoid setting it on fire. Let the concentrate melt away until it blends with the buds.

If you’re short on funds, bongs and rigs won’t appeal to you. Luckily, there are homemade ways to smoke shatter, such as hot knifing.

Fair warning, however: this method is still a bone of contention in the community because it poses risks of injury to the users.

If we’re being honest, the whole process can go sideways if you’re not careful. Every step should be followed to a T; there’s no room for improvisation.

If you’re a newbie, best to leave this method to the pros or find someone who can guide you.

What do you need to smoke shatter this way? Two knives and a stovetop, just regular things you already have in your kitchen.

How to Smoke Shatter Using the Hot Knife Method

Step 1: Grab two knives and heat them up using the stovetop in your kitchen. Wait until they turn red.

Step 2: Put some shatter concentrates between the knives. This will release smoke that you can inhale right off the bat. Pro Tip: Some people struggle with putting concentrates on both knives. You could try heating only one and just dab the concentrates on the other one.

Smoke Shatter in a Vape Pen

Perhaps the quickest and most labour-saving way to smoke shatter is using a vape pen.

Granted, not everyone has one, but vape pens are no longer as costly as they once were.

Moreover, they’ve gone multipurpose but are still very easy to use. Even beginners can get the hang of it in just a few uses.

Should you decide to buy one, check the specs thoroughly to ensure that you end up with a vape pen that can do the job. Not all vape pens are compatible with shatter.

How to Smoke Shatter Using a Vape Pen

Step 1: Place shatter inside your vaporizer.

Step 2: Warm it up but be sure that you have adjusted the temperature accordingly. Vaporizing shatter requires more heat than other substances. FYI: Low heat gives off a better taste, but you’ll get a better kick with high temperatures.

Step 3: Push the button to release the vapour.

Pro Tip: How do you inhale shatter properly? Draw the smoke in slowly but surely.

We’ve listed different ways to smoke shatter. Each one has its advantages and disadvantages. So, what’s the best way to smoke shatter? Like we said before, the answer’s up to you — your preferences, needs, and capabilities.

Want to learn more about shatter? Head on over to our blog for more tips and tricks.

Other articles you may enjoy…

How To Use A Vape Pen

What is Hash Oil & How Do You Use It?

The Ultimate Guide on How To Smoke Hash

About the Author: Brad

Brad loves writing about cannabis-related topics. He uses marijuana both medicinally and recreationally. He was born in Beautiful British Columbia and has lived in Vancouver for most of his life. When not writing, he can be found hiking up Grouse Mountain or having a drink with friends.